Improvements made, but serious challenges ahead for Clackmannanshire Council

In the past 12 months Clackmannanshire Council has significantly improved how it works, but its finances remain an issue of serious concern says the Accounts Commission.

The Commission, Scotland’s local authority watchdog, has praised the work the council has done so far, and recognises the increased pace of change during the past year. This follows serious concerns raised by the Commission about the council’s financial position in a 2018 review.

In a follow-up report published on 27 June, the Accounts Commission says that over the last 12 months the council has demonstrated a determination to change, including making savings, appointing a new management team and improving how councillors and officers work together. Clackmannanshire Council is also building effective working relationships with local councils and others as it seeks to establish sustainable and efficient services for the future.

But the Commission remains seriously concerned about the council’s financial position. With a cumulative budget gap of over £23 million in the next three years, maintaining the pace of change, transforming services and making long-term savings are critical.

You can view the full report here: http://bit.ly/2IS1tpF 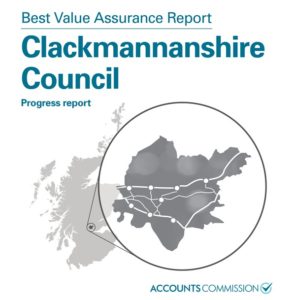 Registered Scottish Charity Limited by Guarantee, Charity No: SC042543 Company No: SC396838
CTSi© 2019 | Created by Art is an Option
This website uses cookies to improve your experience. We'll assume you're ok with this, but you can opt-out if you wish.Accept Reject Read More
Privacy & Cookies Policy
Necessary Always Enabled